On the Friday we get several trains to Nikko, which is approximately 128 km and 24 centimetres to the north of Tokyo. It's shrine central, basically, which means lots of red buildings, epic gateways, big Kill Bill style steps, the unmissable chance to become part of a big tourist swarm - and the occasional peaceful moment of sylvian calm.

The weird thing is that just about every shrine and temple in Japan we see seems to have been burnt down and rebuilt at some stage. There doesn't seem to be much pondering over the old Ship of Theseus / old axe-new axe conundrum here.

In Nikko, for example, Tosho-gu's five-storey pagoda is "an 1819 reconstruction of a 1650 original, which burned down" (according to the Rough Guide). Over in Nara (which we are to visit later), the Great Buddha Hall of Nara's Todai-ji temple "was burned in the fires of war in 1180 and 1567" (according to the accompanying ticket). Part of Kyoto's Nijo Castle, meanwhile, was "struck by lightning and burned down in 1750... later in 1788 some parts of the palace were destroyed by a city-wide fire" (according to the accompanying pamplet) - and so it goes on. During our time in Japan we see just one fire station - food for thought, eh Emperor Akihito? 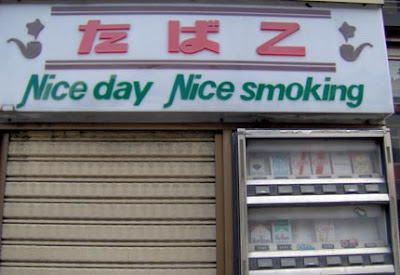 After a bite to eat and some tea in a cafe overlooking the mountains that surround Nikko, we go back to Tokyo and discover our hotel television has CNN. Then we discover that Sir Edmund Hillary has died. We sleep for three hours, then go to the 24-hour McDonald's.
Posted by Will at 11:00 pm

I actually wasn't aware it was called that until very recently. I only knew it as "the old axe thing".

I always refer to it as The Trigger's Broom Conundrum.