As our hotel in Shiodome has breakfast included – a rare thing for cheapskate travellers like us – the day begins remarkably, with Dan happily eating seven bread rolls and three croissants. "Ja, pan!" ("right, bread!") to briefly pun in Japanese. (Tick!)

Packing up, the brave trio get a shinkansen, or bullet train, to Kyoto. It's around this time that the phrase, "That's mental," said in a Clive Owen Extras Christmas Special style, begins to be used with increasing frequency. In this case, it's when we find out how it is that all the seats on the "shinks" always face in the direction of travel. They swivel. We didn't see this happening, but according to Birdy, who has, when the train gets to the end of the line and prepares to go in the opposite direction, every single row of seats rotates in unison to face the other direction. As noted above: that's mental.

So we get to Kyoto and check into our ryokan. This is a hostel featuring special Japanese-style rooms carpeted with tatami mats which you are required to walk upon using supplied slippers. Also, there are no beds: the bedding is unpacked for you in the evening to make the room suitably minimalist and Zen, or something, during the day. And sorry to keep going on about lavatories, but the shared toilets here are notable for having a motion-sensitive overhead light, meaning that if you're sitting or standing still for a short while, the lights will turn off. If you don't want to sit in the dark, you have to start jiggling around. Or, as Birdy put it, confusedly but evocatively, "You have to piss like you're Stevie Wonder playing the piano."

The inimitable japanologist Alex Kerr, whose brilliant Lost Japan I read during the trip and, like a stuck record, frequently quote to the others, devotes a whole chapter to Kyoto. "Kyoto hates Kyoto," he writes. "It is probably the world's only cultural center of which this is true. The Romans love Rome. Beijing suffered greatly during the cultural revolution, but most of the damage was wreaked by outsiders, and the citizens of Beijing still love their city. But the people of Kyoto cannot bear the fact that Kyoto is not Tokyo. They are trying with all their might to catch up with Tokyo, but they will never come close. This has been going on a long time. I first noticed the malaise shortly after moving to Kyoto. I asked a friend, 'When did the unhappiness set in?' and he answered, 'Around 1600.'"

Kerr points to needle-shaped Kyoto Tower, built in the 1960s, as epitomising such unhappiness – motivated, as it was, by an attempt to break up a skyline which the city government saw as old-fashioned, un-Tokyo-like. In such a way, Kyoto has tried to cut links with its past. There are still umpteen shrines, temples and special places to visit – an amazing number in fact – but you have to snap the hell out of your reverie when you're travelling between them, however short the distance.

Anyway, it's nearly closing time, but we manage to squeeze in Nijo Palace, which looks like this. 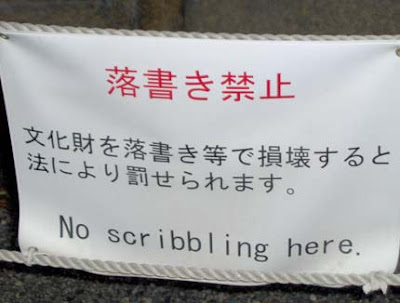 After a delicious meal which involves being handed plates of raw meat which you have to cook yourself on a hot pan in the middle of your table, we head back to the ryokan, as there's an 11pm curfew. We stop at one of the cigarette machines which populate Japanese streets. No Marlboro Lights unfortunately, so we have to opt for "Mild Sevens". Unfortunately the first pack purchased only contains 1mg of tar, so Dan has to buy another packet with a higher content. Humans are so funny sometimes.