To kick things off, we head over to Asakusa, which is not to be confused with Akasaka or Akihabara.

Whereas I found the Rough Guide to India memorable for its frequent exhortations to "get up early and see it at sunrise", the Rough Guide to Japan's quirk seems to be calling almost every shrine or temple in Japan "venerable". Asakusa's Senso-ji temple is no exception – apparently it's "the site of Tokyo's most venerable Buddhist temple". Anyway, it's our first bit of shrine-temple action of the holiday, so it's pretty exciting. There's a big barbecue thing in front of the temple, which everyone uses to waft smoke in their faces. The smoke is supposed to be the breath of the gods. It's then customary to go to the water fountain and wash your mouth out. Well, you wouldn't want to stink of gods, would you? While I'm taking the picture above, a Japanese fellow introduces himself and explains that all those barrels are filled with sake. Hideo – for that is his name – is a jovial old cove, and gives us a few recommendations of things to do in Tokyo - sumo, a shrine in Kanda, Tsukiji fish market. He even recklessly marks the locations in pen in Dan's Lonely Planet, which is on loan from Sutton library. He asks my age. "Nijuroku," (twenty-six), I say. Hideo is amazed at my fluent Japanese.

There's also a monument dedicated to pigeons next to the shrine. I'm not sure why this is - but I was interested to see that it was actually covered in real pigeon droppings. They even shit on their own! For lunch, we go to a restaurant where you put your money in a machine near the door, press the button next to the meal you want and take your ticket to the chef. The lack of human contact is perfect for shy and stupid gaijin like me and Dan.

Next, for no particular reason other than that it's on the way, we head to Miyamoto Unosuke Shoten, a Japanese percussion shop run by a family who've been making drums for 140 years. We head up to the fourth floor, where the museum is located. The lady checking our tickets unlocks the museum door and switches the lights on, revealing an array of percussion instruments – over 300, apparently. "These drums were collected with the aim of fostering an appreciation of the role they have played in culture around the world," says the sign. The lady shows us which ones we're allowed to play and which drumsticks we should use to play them. Then she walks out, closing the door behind her. Me and Dan attack.

After large amounts of steam have been let off, we tube over to Ueno to visit Tokyo National Museum. It looks like this, from the outside: On the way, though, there's a girl on a unicycle balancing bowls on her head. 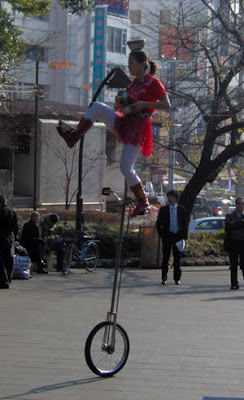 Later that evening, I pop into HMV and excitedly head to the "M" section to see if they have Menswear's second album, which was only ever released in Japan. They don't.
Posted by Will at 11:00 pm

Ha ha, some people remember Menswear. They were the next big thing, y'know? Soon come.