We have to vacate our capsules by 10am, even though we're staying another night. This is a bit tricky after the previous night's festivities, but we just about manage and hop on the train to Nara.

Nara is the birthplace of Japanese civilisation, so it is only appropriate that we should go there to play Time Crisis 2 and Mario Kart in the arcade. Birdy tries to win some cuddly toys – God knows why – and fails. This businessman has the same idea. While we're there, Birdy shows me and Dan the extraordinary thing that is Purintu Kurabu. Purintu Kurabu? Oh right. Roughly translatable as "print club", this is aimed at 12-year-old girls (and stupid gaijin, of course) and involves going into a large photobooth with your friends, making stupid faces at a camera, using an attached computer to decorate the resulting pictures and pressing "print".

This is probably one of the most all-out FUN things we do during our trip - because the computer somehow airbrushes your face, makes your eyes all big and, basically, turns you into some kind of cartoon character, the results are pant-wettingly funny.

Maybe I should just show you. 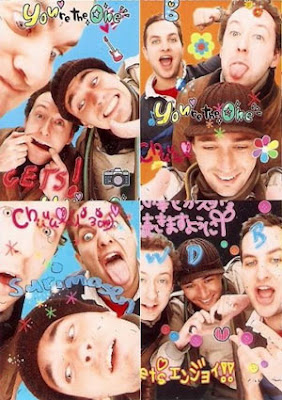 As well as such silliness, we visit Todai-ji, the town's massive wooden temple, founded in 745 and thought to be the world's largest wooden building. It's good we got to see it, as [looks at watch], yep, it'll probably get accidentally burnt down soon. Back at the hotel, the light in my capsule isn't working, so I write up some of my travel diary by the light of some messed-up mega-bright Japanese manga. A bit later, we go for a meal of Kansai speciality okonomiyaki, which contains just about everything (chicken, pork, beef, prawns, squid, octopus and so on) in a big omelette with sweet sauce on top – the unusual mix of sweet and savoury reminds me a bit of Moroccan pastilla. It's probably the most filling thing I've ever eaten; afterwards I feel like my stomach has turned into a balloon filled with potatoes.

Then we go bowling, for some reason. Birdy is strangely good. I see no difference in facial features created by the machine. Are you sure that you weren't just pulling silly faces?