Back to the Future turns 25

Not the first time this blog has pondered Back to the Future (notes on Doc Brown's inheritance here, and brief digression on the "we don't need roads" line with heated discussion in the comments here) - but last night was the first time I've ever seen the film in the cinema (it's currently on re-release to celebrate its 25th anniversary) - and a few fresh thoughts came to light. 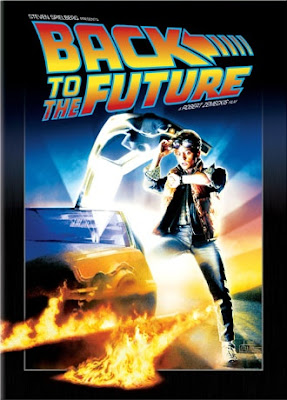 - Although the writers will doubtless be wrong about the everyday availability of hoverboards and miniature pizzas (you've got five years to abolish roads, Obama!), the fact that the time machine Mk.II runs on household waste does anticipate the rise of the recycling movement.

- PRO TIP: If you want to find out more about time and how it works, do a Google image search for Claudia Wells, who played Jennifer.

- On the big screen, you get a clearer sense of how many brands, signs and billboards there are jostling for attention (aside from, say, the Calvin Klein and Pepsi references within the script itself). The big JC Penney sign in the Twin Pines car park should feel like intrusive product placement, but it actually adds some colour to the scene - and its neon glow contrasts with Hill Valley's 1955 shops.

- I've always thought of BTTF as a perfectly plotted film, but in the cinema there are a few moments that are just too pat, and as a result, end up being unintentionally funny - for example, Doc pointing out that you can never predict when or where a bolt of lightning will strike is followed immediately by Marty's OH WAIT WHAT'S THIS FLYER I'M HOLDING? Despite clearly being fans, I sensed that my fellow cinema-goers also found it tricky to suspend their disbelief when Marty's family photo shows, um, his brother's head missing. ("Erased... from existence!")

- Doc's social ineptitude is wonderfully done - cf. his awkwardness when Lorraine turns up unannounced at the Brown residence, and as his hilarious description of the Enchantment Under the Sea ball as a "rhythmic ceremonial ritual".

- Just before departing for the future, Doc tells Marty: "I've always dreamed on seeing the future, looking beyond my years, seeing the progress of mankind. I'll also be able to see who wins the next twenty-five World Series." Is this a joke? He goes nuts when Marty tries to do something similar in the second film. (Brings us back to the question of where the Brown estate comes from.)

- Sarah and I are flying to India on our honeymoon exactly 25 years to the day after Marty and Doc's very first time travel experiment. October 26 is also the anniversary of the eradication of smallpox and the date the far side of the moon was first photographed.

- I enjoyed this analysis by Adam Smith (!) over on the Empire site (although he spelt 'Zemeckis' wrong):

Applying anything approaching rigorous criticism to Back To The Future would be like taking a jack-hammer to a perfectly risen souffle, but there are a number of intriguing readings to [Robert] Zemekis' movie, particularly since hostile critics of the directors' subsequent work, Forrest Gump and Contact, have detected in him a Capra-esque conservatism. You could make the case that BTTF is a manipulative critique of the 80s through the prism of an airbrushed version of the 50s that owes more to George Lucas' American Graffiti than the turmoil of the decade itself (the burning crosses and blacks dangling from trees are presumably "just out of shot").


Zemekis seems to be accusing the 80s of betraying the American Post War dream; Marty's frumpy, nervous, bullied family are not the way things were meant to turn out (next to them at the dinner table you wonder if Marty ever inquired whether he was adopted) in the same way that the grasping 80s are not the legitimate offspring of the "innocent" 50s. Of course this is all a bit speculative.

(Actually, as they watch George being bullied at school, Doc does murmur to Marty: "Maybe you were adopted.") Of course, when Marty returns to 1985 having put right what once went wrong, his family are a less "loser"-like version of themselves and seem to be living the '80s American dream. Which, on reflection, is why they seem a little bit like a bunch of badly-dressed yuppie assholes. Meanwhile, getting back home to the people he loves apparently isn't enough: Marty has to be rewarded with a big gas guzzler too.

- I wonder if this film has ever been shown in Libya.
Posted by Will at 6:12 pm

Email ThisBlogThis!Share to TwitterShare to FacebookShare to Pinterest
Tags: Back to the Future, film

Brilliant. And a restrained lack of reference to "fuchsia". I started reading the heated comments and thought, "who is this idiot?" before realising that it was me.